Frank has been on tour for 30 years and is considered to be one of the most sought-after Blues & Boogie-Woogie pianists. He has played concerts all over Europe, Paraguay, Bolivia, the United States and North Africa.
14 CDs have been published so far with various musicians, e.g. Carey Bell, Jean-Pierre Bertrand, Nappy Brown, Jimmy Coe, Herb Hardesty, Red Holloway, Stephan Holstein, Bob Margolin, Jimmy McCracklin, Louisiana Red, Alex Schultz, Matthias Seuffert, Cary Smith, Bob Stroger, Hubert Sumlin, Engelbert Wrobel and Rusty Zinn.
"A far cry from mere virtuoso pyrotechnics, Muschalle demonstrates how to remain within the idiom and still tell little stories with motifs and riffs, instead of simply juggling with them… " (Jazzpodium) 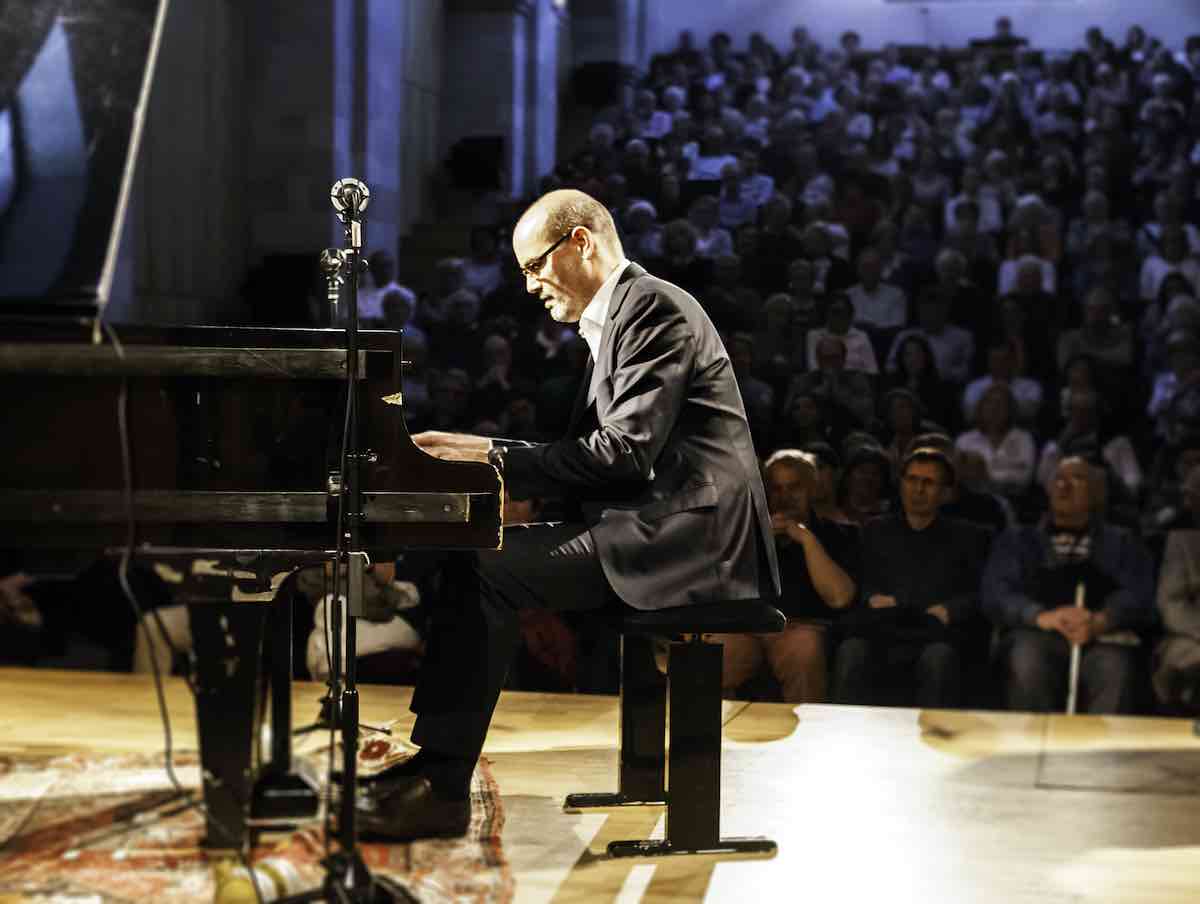 More…
Born in 1969, Frank discovered Boogie-Woogie after 11 years of classical piano tuition. From then on he has dedicated himself to studying this kind of music. Frank has been influenced by the Boogie-Woogie Trio Ammons, Johnson, Lewis but also by pianists like Axel Zwingenberger, Little Brother Montgomery or Cow Cow Davenport.
In 1995, his debut CD Great Boogie-Woogie News was published by the Viennese Label Document Records. This was followed by a tour through Austria together with the Mojo Blues Band and Red Holloway and joint concerts with Axel Zwingenberger and Vince Weber.
In 1997 his second CD Battin` the Boogie was published and Frank played at festivals such as Stars of Boogie-Woogie in the Konzerthaus in Vienna.In September 1998 he was invited on a two-week tour of South Carolina together with the Mojo Blues Band. On this tour he made recordings with Jimmy McCracklin and Nappy Brown for Ripete Records (USA).
The highlight of 2002 was definitely the three-day series of concerts for the 40th anniversary of the AMERICAN FOLK BLUES FESTIVAL in Eisenach/Thuringia, where Frank played with legendary musicians such as Hubert Sumlin, Carey Bell, Bob Stroger and Louisiana Red. This was followed by the JUMPIN´ AT THE FLAGSHIPS Tour through various Swiss theatres in September 2002. This project was financially supported by the Swiss Ringier Publishing Group and presented Frank Muschalle with Jazz/R&B musicians like Red Holloway, Carrie Smith, Rusty Zinn or Jimmie Coe. A one-hour documentary of these concerts was shown on the Swiss TV channel DRS, but live recordings of these concerts were also made. Apart from various tours through Germany, Austria and Switzerland – with saxophonist Matthias Seuffert among others – Frank appeared with his trio at the International Jazzfestival at Sea in 2004 – a jazz-cruise through the Mediterranean together with Paul Kuhn, Charly Antolini, Jiggs Whigham, Olivier Franc and others.
In 2007 the trio was invited on a tour of Paraguay together with Axel Zwingenberger.
Because of the great success the tour was repeated in 2008 and 2009 and not only took the musicians to Paraguay, but this time also to Bolivia. This was followed by concerts in North Africa, and in 2013 there was yet another invitation to perform in Paraguay. In April 2019 Frank was asked to play concerts in the United States (Chicago, Houston and Cincinnati) and Canada (Ottawa). These concerts were organised  by the foreign office in cooperation with the local Goethe Institute. In September 2019 there was a further invitation from the Goethe Institute for a five-day concert tour to Atlanta/USA. In the meanwhile, Frank has published 14 CDs.

Since 2015 Frank has been playing with Stephan Holstein (saxophone / clarinet) (photo of the duo with Stephan) in a duo line-up, in addition to joint appearances by the Frank Muschalle Trio feat. Stephan Holstein The first encounter took place in 2004 on a jazz cruise in the Mediterranean. After a few concerts in a quartet and the joint CD recording "Sleigh Ride", Frank and Stephan played the first duo concerts and this line-up has developed into a permanent format. No wonder: Stephan Holstein (Augsburg) is one of THE saxophonists and clarinetists in Europe. 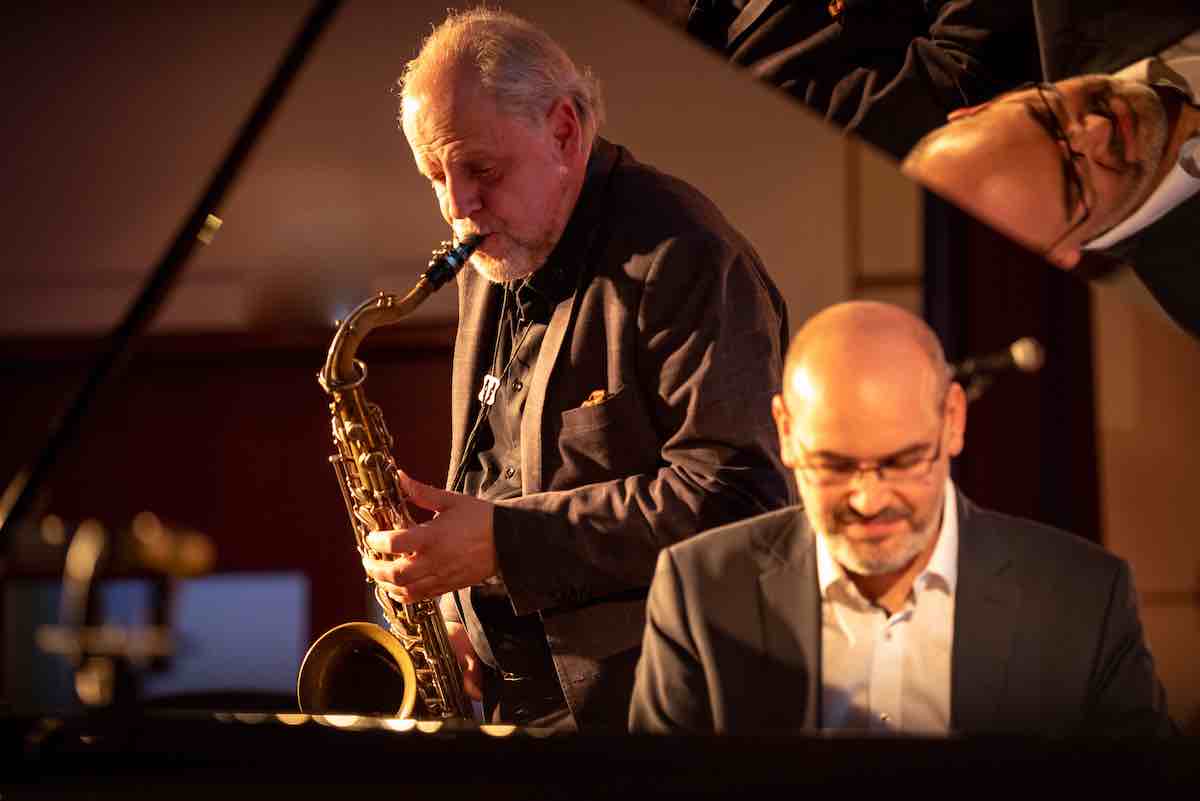 The Frank Muschalle Trio with Dani Gugolz (double bass/ vocals) and Peter Müller (drums)  has been a permanent cast since 2001. Since then, many joint CD recordings have been made and countless concerts have been played.
Despite the physical distance between their homes (Berlin-Vienna), the three musicians have been coming together for concerts and touring together for years. Undoubtedly, Dani and Peter are among the musical heavyweights in the blues & boogie scene. 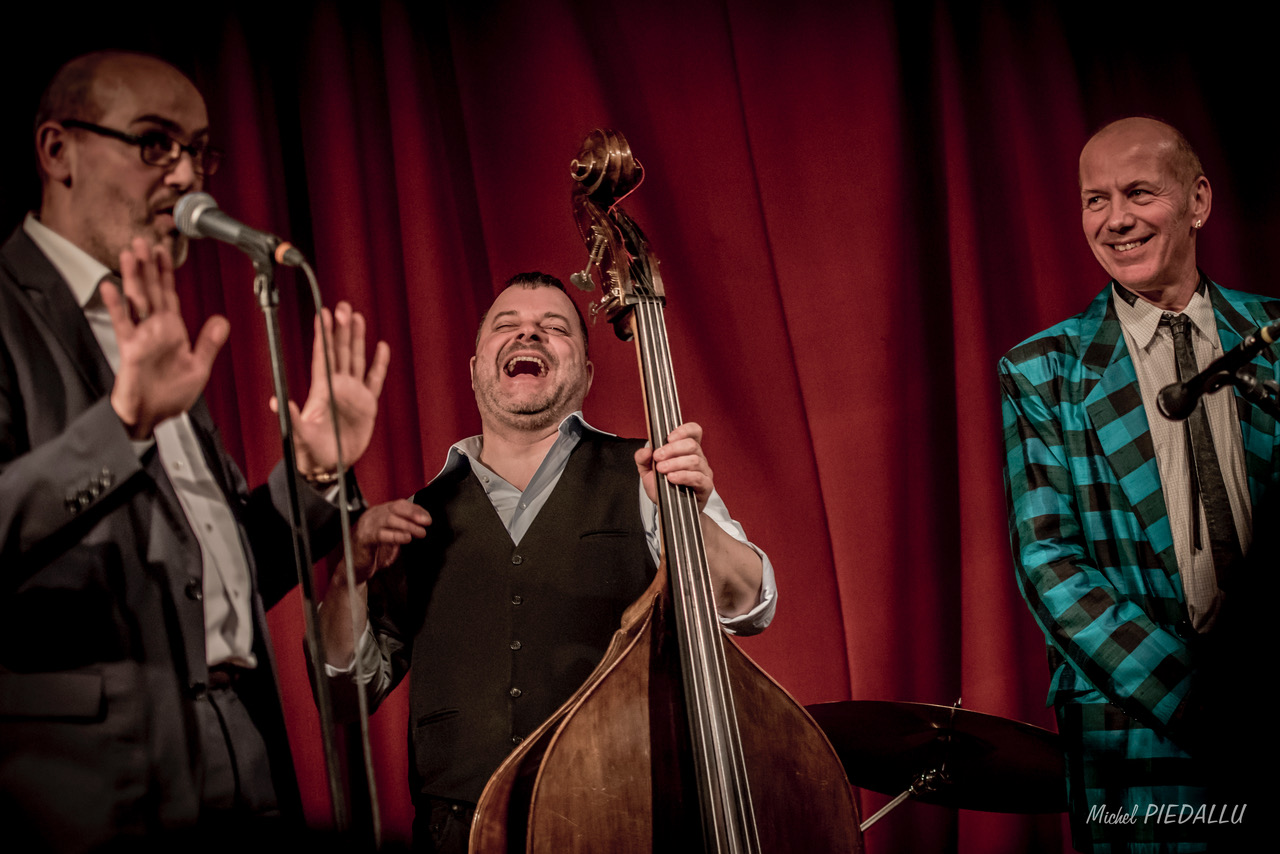 The trio line-up with Dirk Engelmeyer (drums / vocals) and Matthias Klüter (double bass) has its origins in 1990. At that time, Frank gave his first joint concerts as a duo with Dirk Engelmeyer. Matthias Klüter joined them a few years later and the trio has been on tour with this line-up ever since. This formation played, for example, various tours in Paraguay and Bolivia in the years 2007-2013. 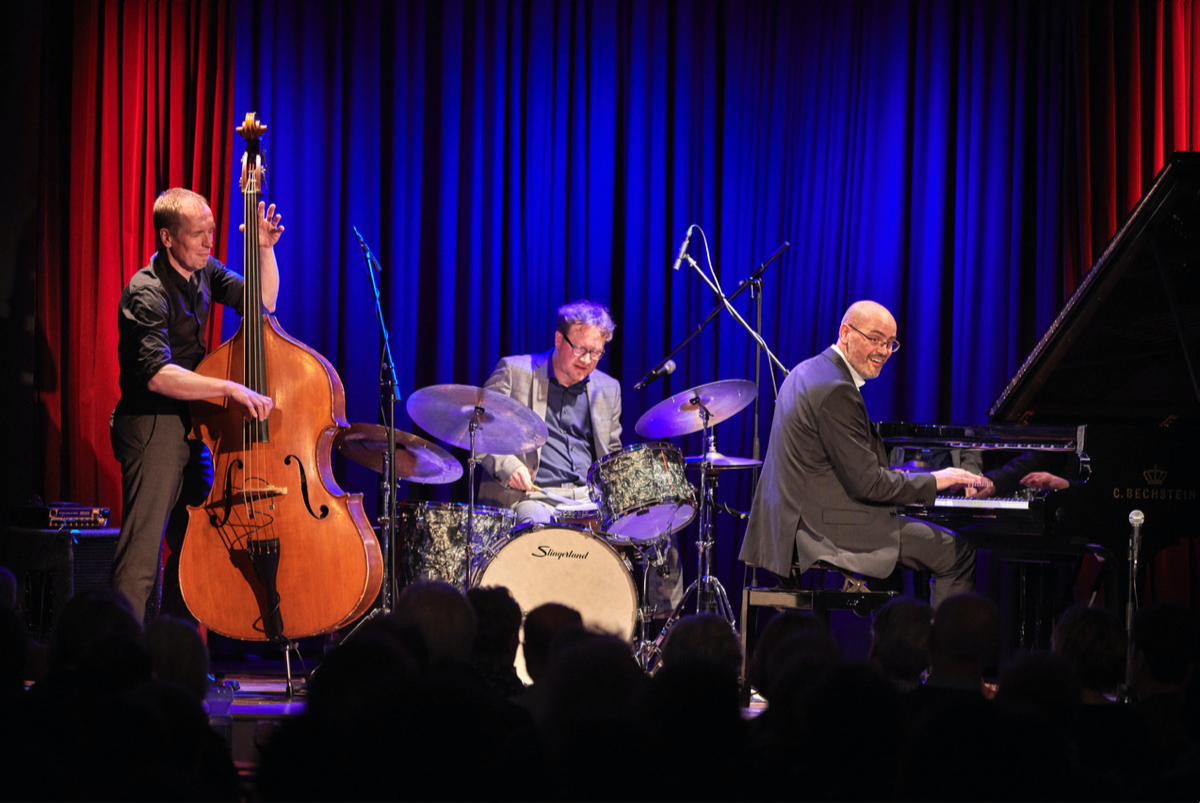